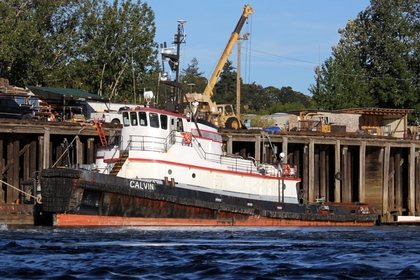 Built in 1960 by Albina Engine and Machine Works of Portland, Oregon as the Mikimiki (hull #335) for Young Brothers Limited of Honolulu, Hawaii.

In 1977, the company's corporate name was changed to the Dillingham Tug and Barge Corporation of Honolulu, Hawaii.

The tug was later acquired by the Sause Brothers Ocean Towing Company of Coos Bay, Oregon. Where she retained her name.

In 2013, she was acquired by Salmon Bay Barge Lines Incorporated of Seattle, Washington. Where the tug was renamed as the Calvin.

She is a twin-screw tug powered by two Fairbanks Morse diesel engines.