She was the first of two, Ocean class Articulated Tug and Barge units designed by Ocean Tug and Barge Engineering of Milford, Massachusetts. And, constructed for Savage Marine Incorporated.

In 2020, Savage Marine Services was acquired by the Kirby Corporation of Channelview, Texas. Where the units retained their names.

Outfitted with an Articouple hydraulic coupler system. The tug is powered by two, EMD 16-710T3 diesel engines. With Lufkin RHS 3200 reduction gears, at a ratio of 5.3:1. Turning two, 133.82(in), fixed pitch propellers, mounted in kort nozzles, for a rated 8,000 horsepower. 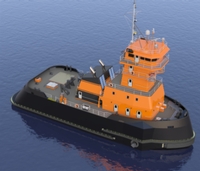 
Back to SAVAGE MARINE SERVICES INCORPORATED