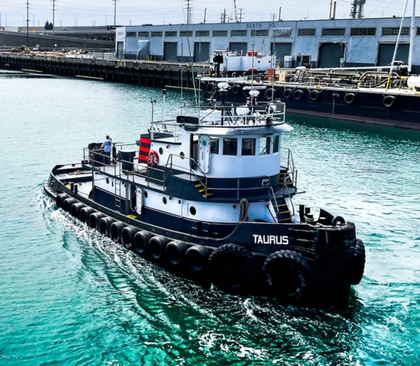 Built in 1978, by Service Marine Industries of Amelia, Louisiana as the Miss Nicole Rene (hull #125) for the Smith Marine Towing Corporation of Morgan City, Louisiana.

In 1998, the tug was acquired by the Kelly-Ryan Incorporated of Seattle, Washington. Where she was renamed as the Casey Marie.

In 2004, she was acquired by Westar Marine Services Incorporated of San Francisco, California. Where the tug was renamed as the Taurus.

In 2015, the tug was leased to the Curtin Maritime Company of Long Beach, California. Where she retained her name.

Her electrical service is provided by two, 30kW, Northern Lights generator sets. The tug's capacities are 21,000 gallons of fuel, 110 gallons, and 3,000 gallons of water.


Back to CURTIN MARITIME COMPANY