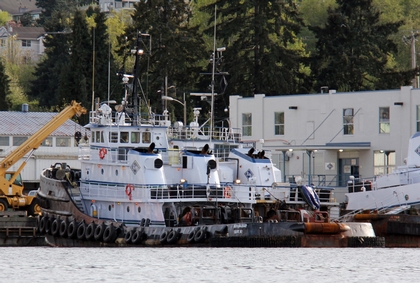 Built in 1976, by Main Iron Works Incorporated of Houma, Louisiana (hull #306) as the Mana for the Dillingham Tug and Barge Company of Honolulu, Hawaii. A subsidiary of the Foss Maritime Company of Seattle, Washington.

In 1988, the tug was transferred to Hawaiian Electric Industries subsidiary, the Young Brothers Company of Honolulu, Hawaii.

In 1998, the tug was acquired by the Foss Maritime Company of Seattle, Washington. Where she was renamed as the Wendy Foss.

In 2001, the tug was acquired by the SeaCoast Transportation Company of Seattle, Washington. Where she was renamed as the Pacific Challenger.

In 2007, the SeaCoast Transportation Company was acquired by K-Sea Transportation Partnership Incorporated of East Brunswick, New Jersey. Where the tug retained her name.

In 2016, she was phased out of service. And, was "laid up" at the Kirby Corporation's facilities at Lake Union in Seattle, Washington.

Her electrical service was provided by two, 75kW generator sets. The tug's capacities were 110,000 gallons of fuel.
(Kyle Stubbs)