Built in 1940, by the Bethlehem Steel Company of Beaumont, Texas (hull #231) as Edmond J. Moran for the Moran Towing Company of New York, New York.

In 1943, the tug was requisitioned by the United States Navy. Where she retained her name.

In 1946, she was returned to the Moran Towing Company of New York, New York. Where she retained her name.

In 1976, the tug was acquired by Andrie Incorporated of Muskegon, Michigan. Where she was renamed as the Barbara Andrie.

The tug's towing gear consists of a single drum, Almon Johnson, hydraulic towing machine. With level wind, outfitted with 2000(ft) of 2(in) of towing wire. On her bow she is outfitted with two Nabrico Electric / Hydraulic, 50 ton winches fitted with 1(in) wire rope.
(Carel Boone) 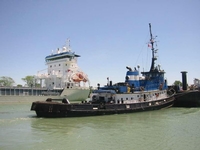 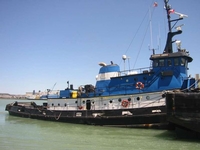