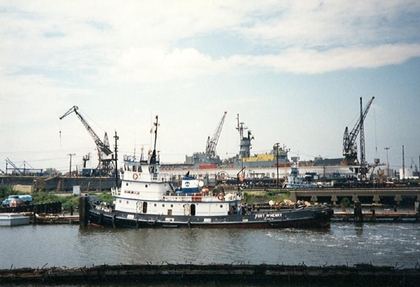 Built in 1942, by Levingston Shipbuilding of Orange, Texas (hull #212) as the Susan A. Moran for the Moran Towing Company of New York, New York.

In 1942, the tug was acquired by United States Navy. Where she was designated as the YT-242 (Uncas). And, allocated to the Service Force, Atlantic Fleet.

In 1946, she placed out of service at Boston, Massachusetts. And, in January of 1947 she was stricken from the Naval Records.

In 1947, the tug was returned to the Moran Towing Towing Company of New York, New York. Where she was renamed as the Pauline L. Moran.

In 1961, she was transferred to the Moran Towing Company subsidiary, the Curtis Bay Towing Company of Baltimore, Maryland. Where she was renamed as the Sewells Point.

In 1975, the tug was half sunk when she was hit by ship during a launching at the Sun Shipbuilding Company in Chester, Pennsylvania on the Delaware River.

In 1976, she was sold by the Curtis Bay Towing Company to a salvage company for $1 "as is." Later that year, the tug was was rebuilt.

In 1977, she was acquired by the Interstate Oil Transportation Company of Philadelphia, Pennsylvania. Where the tug was renamed as the Fort McHenry.

On April 14th, 1987 the Martians Partnership, LLP of Tampa, Florida was formed. And, assumed control of the SONAT Marine Company's tug, and barge operations in Philadelphia, Pennsylvania, as well as in Tampa, Florida.

However in March of 1989, the Exxon Valdez ran aground in Prince William Sound near Valdez, Alaska. And in 1990, the Oil Pollution Act of 1990 was passed calling for the double hulling of all petroleum carrying vessels by January 1st of 2015. As well, as other stipulations that effected Maritrans including manning, preparedness, and spill prevention. Maritrans filed suit to fight the stipulations set fourth by OPA '90.

By the mid 1990's Maritrans Operating Partners had begun to consolidate its business. By first, backing out of the black oil trade, and carrying only petroleum products and petrochemicals. As well as, the phosphate trade, and local transportation in Baltimore, Maryland that was part of the Harbor Towing subsidiary. Which did not fit into Maritrans's new business model. As Maritrans backed out, local transportation companies emerged, and established operations in the area. They included the Bouchard Transportation Company of Melville, New York; and the Vane Brothers Company of Baltimore, Maryland.

In 1992, the tug was acquired by Dana Marine Services of New Orleans, Louisiana. Where the tug retained her name.

In 2000, she was acquired by Ocean Barges and Tug Logistics. A subsidiary of the Transzone Shipping Company of Port Au Prince, Haiti. Where the tug retained her name.

In 2004, the tug was dropped from documentation. Her current, and or, final disposition is unknown. She was a single screw tug, rated at 1,200 horsepower.
(NavSouce Online, Jeff Schurr, Dave Boone, Captain Eric Takakjian)