Built in 1956, by the Bethlehem Steel Company of Staten Island (hull #8479) as the Cleveland for the Pennsylvania Railroad Company of Philadelphia, Pennsylvania.

In 1971, she was acquired by the Morehead City Towboat Company of Morehead City, North Carolina. Where the tug was renamed as the Fort Fisher.

The Morehead City Towboat Company was later acquired by Cape Fear Towing Company of Wilmington, North Carolina. Where the tug retained her name.

In 2007, the Cape Fear Towing Company was acquired by the Moran Towing Corporation of New Canaan, Connecticut. Where the tug retained her name.

In 2017, she was phased out of active service. And, was "laid up" at Morehead City, North Carolina.

In 2018, the tug was sunk as part of an artificial reef program, off of the North Carolina coastline.

She was originally powered by a single, Cleveland diesel electric engine. The tug was repowered with a single, Alco 12-251C diesel engine. She was a single screw tug, rated at 2,400 horsepower.
(Paul Strubeck, Captain Matt Register) 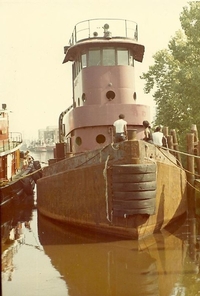 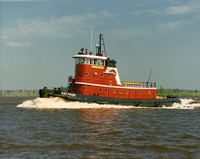