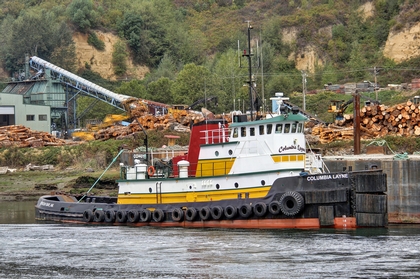 Built in 1965, by Main Iron Works Incorporated of Houma, Louisiana (hull #139) as the Mariner for the Interstate Oil Transportation Company of Philadelphia, Pennsylvania.

In 1998, the tug was acquired by the Dunlap Towing Company of Everett, Washington. Where she was renamed as the Suiattle.

In 2015, she was acquired by Channel Construction Incorporated of Juneau, Alaska. Where the tug was renamed as the Columbia Layne.

Originally fitted with the first, twelve cylinder Fairbanks Morse, turbo charged, diesel engine that was introduced into marine applications. The tug was re powered with a single, EMD 16-645 E7B diesel engine. With a Phila 42VRMGH reduction gear, at a ratio of 4.613:1. Turning a single, 120(in) by 120(in), four bladed, fixed pitch, propeller, in a fixed kort nozzle. She is a single screw tug, rated at 3,070 horsepower.

Her electrical service is provided by two, 99kW Delco generator sets. Driven by two, Detroit 6-71 diesel engines. Her capacities are 87,000 gallons of fuel oil, 7,200 gallons of potable water and 600 gallons of lube oil.

The tug's towing gear consists of a single drum, Markey TYS 32 towing winch. Outfitted with 2,250(ft) of 2(in) towing wire. She is also outfitted with a three pin, hydraulic system, coupled with a hold down.
(Captain Eric Takakjian, Kyle Stubbs)


Back to CHANNEL CONSTRUCTION INCORPORATED