Built in 1969, by Matton Shipyard of Cohes, New York (hull #338) as the James Turecamo for the Turecamo Harbor and Coastal Towing Corporation of New York, New York.

Her electrical service is provided by two 60kW generator sets. The tug's capacities are 38,833 gallons of fuel, and 13,472 gallons of ballast. 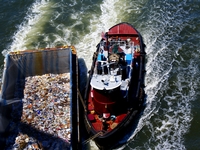