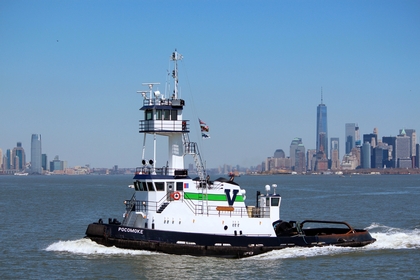 Built in 2008, by Thoma-Sea Boat Builders Incorporated of Houma, Louisiana (hull #135) as the Pocomoke for the Vane Brothers Company of Baltimore, Maryland.

She was the eleventh Patapsco Patapsco class tug designed by Frank Basile of Entech and Associates of Houma, Louisiana. And constructed by Thoma-Sea Boat Builders for the Vane Brothers Company.

Named for the Pocomoke River, which stretches approximately 66 miles from southern Delaware through southeastern Maryland. At its mouth, the river is an arm of the Chesapeake Bay. Where the upper river flows through a series of relatively inaccessible wetlands called the Great Cypress Swamp, largely populated by Loblolly Pine, Red Maple and Baldcypress.

The river is the easternmost river that flows into Chesapeake Bay and is reputed to be one of the deepest rivers for its width in the world. “Pocomoke” is interpreted from the the Algonquian languages as "dark (or black) water" Algonquian languages. Derived from the words for "broken (or pierced) ground," and referring to the farming practices of the surrounding indigenous peoples. 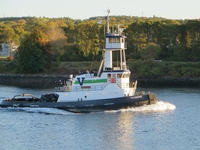