Built in 2011, by the Chesapeake Shipbuilding Corporation of Salisbury, Maryland (hull #96) as the Hunting Creek for the Vane Brothers Company of Baltimore, Maryland.

Designed by Frank Basile of Entech and Associates of Houma, Louisiana. She was the sixth Sassafras class tug constructed for the Vane Brothers Company.

Named for Hunting Creek, which is a cove and tributary stream of the Potomac River between the City of Alexandria and Fairfax County in Virginia. It is formed by the confluence of Cameron Run and Hooff Run. The community of Huntington takes its name from the creek. Jones Point forms the north side. Dyke Marsh is just to the south. The George Washington Memorial Parkway crosses it on a bridge. 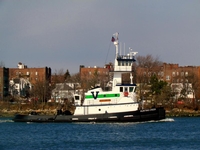