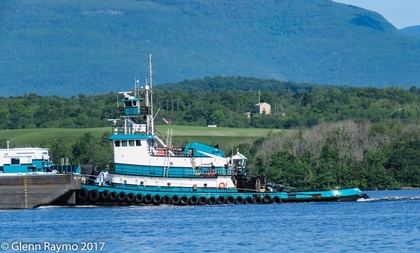 Built in 1973, by Southern Shipbuilding Incorporated of Slidell, Louisiana (hull #102) as the Melvin E. Lemmerhirt for the Great Lakes Dredge and Dock Company of Oak Brook, Illinois.

Named for Melvin E. Lemmerhirt, who was a native of Chicago, Illinois. He had joined Great Lakes Dredge and Dock Company in 1935.

Active for forty-four years, as a project manager in charge of dredging, harbor-deepening and land-reclamation projects throughout the world. After his retirement, he continued served on the board of Great Lakes International, however he passed away in 1985.

In 2004, the tug was given a seven month long capital restoration. This included replacement of over seventy one tons of steel; a major overhaul of the towing winch, as well as the main engines. New fendering, watertight doors and bitts where installed. Also, interior upgrades and complete sandblasting and coating.

In 2012, she was phased out of active service and was "laid up" at Norfolk, Virginia.

In 2014, the tug was acquired by the Poling-Cutler Marine Transportation Company of Freehold, New Jersey. Where she was renamed as the Evelyn Cutler.