The tug was designed to fulfill the Boston Towing and Transportation Company's contract with the Tractebel LNG Shipping Company of North America.

Powered by two, Caterpillar 3516B diesel engines. Turning two, Rolls Royce 1650H z-drives, fitted with 86(in), steel propellers, mounted in stainless steel lined kort nozzles. Which are modular to allow for removal through soft patches on the main deck, while the vessel is in the water if necessary. For a rated 4,400 horsepower.

Her electrical service is provided by two 99kW generators. Driven by two, Caterpillar 3304 diesel engines. For 120/208 volts, three phase, with auto transfer. The generator sets are keel cooled, using the skeg on the underbelly of the tug as a cooler. The tug's capacities are 26,000 gallons of fuel, 895 gallons of lube oil, 9,800 gallons of water, and 24,020 gallons of ballast.

The tug is outfitted with two 3,000 Gallon Per Minute. Alco fire monitors, and Aurora 411 centrifugal pumps driven by single Caterpillar 3406TA engine, rated 480 horsepower. As well as, a Deluge system. Designed to provide water spray coverage over the entire tug. The systems are designed to allow the crew to start and stop the pump engines remotely from the pilothouse.

The towing equipment consists of a 75 horsepower, electric, single drum, Markey DEPCF-50 hawser winch, mounted on the bow. Outfitted with 500(ft) of 9(in) synthetic line. The winch is operated via all electrical controls. Including controls that allow the operator to "freewheel" the drum at any time. Whether loaded, or unloaded. The winch also features Markey's constant tension "hands-free" render-recover system. And, a 75 horsepower, electric, Markey TES-32, towing winch. Outfitted with 2,100(ft) of 2(in) towing wire. With three layers of flange margin synthetic line. 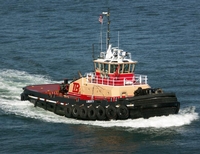