In 2014, she was removed from service. And, donated for use as a training platform to the United States Merchant Marine Academy at King's Point, New York. Where the tug retained her name.

Powered by two, Detroit Diesel diesel engines. She is a twin screw tug, rated at 800 horsepower. 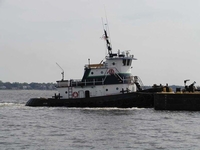