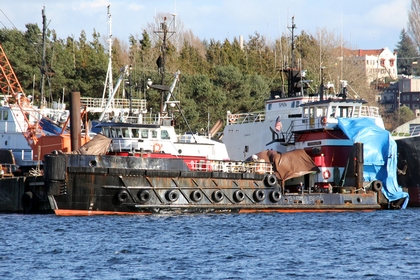 Pictured as: the Pacific Warrior (Westar) Photo by: Kyle Stubbs

Built in 1975, by Halter Marine Services, Incorporated of New Orleans, Louisiana (hull #467) as the Robbyn J. for the Jackson Marine Corporation of Houston, Texas.

In the fall of 1986, Seahorse Marine Incorporated of Lockport, Louisiana merged into the Zapata Gulf Marine Company adding an additional ninety vessels to the fleet.

The Seahorse Marine Company had been founded by the Arthur Levey family as Arthur Levey Boat Company after World War II. The company was later acquired by Petrolane Natural Gas of Belding, Mississippi. Where the company was renamed Seahorse Marine. In 1985, Petrolane was acquired by the Texas Eastern Company of Houston, Texas. Which was a larger natural gas company. However in the fall of 1986, the Texas Eastern Company traded the company to the Zapata Gulf Marine Company for an exchange of stock.

In 1991, the tug was acquired by the Sause Brothers Ocean Towing Company of Portland, Oregon. Where she was renamed as the Powhatan.

In 2016, she was acquired by Westar Marine Services Incorporated of San Francisco, California. Where the tug was renamed as the Pacific Warrior.

In 2020 the tug was acquired by Paradigm Marine LLC of Fort Lauderdale, Florida. Where she retained her name.

The tug's capacities are 50,000 gallons fuel. Her towing equipment consists of a towing machine. Outfitted with 2,200(ft) of 2(in) towing wire.
(Captain Eric Takakjian, Kyle Stubbs)