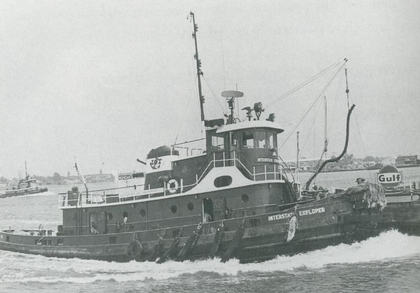 After her construction many companies expressed interest in chartering the tug but not purchasing it. The Dravo Corporation had installed a kort nozzle on the tug as a demonstration.

In 1959, the tug was chartered by the for the Dalzell Towing and Transportation Company of New York, New York. Where she retained her name.

In 1961, she was chartered by the Interstate Oil Transportation Company of Philadelphia, Pennsylvania. Where the tug retained her name.

In 1971, the tug was acquired by Interstate Oil Transportation Company of Philadelphia, Pennsylvania. Where she was renamed as the Interstate Explorer.

In 1980, she was acquired by the Texaco Marine Company Incorporated of Beaumont, Texas. Where the tug was renamed as the Texaco Explorer.

In 1982, the tug sank in the Gulf of Mexico. Outfitted with a kort nozzle, and flanking rudder. She was a single screw tug, rated at 1,640 horsepower.