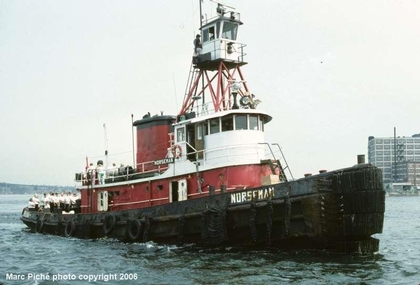 Built in 1953, by Higgins Industries Incorporated of New Orleans, Louisiana (hull #11645) for the United States Army.

In 1975, the tug was acquired by the Eklof Marine Corporation of Staten Island, New York where she was renamed as the Norseman .

In 1998, she was acquired by Capt. Lee Towing of Harvey, Louisiana.

As of 2000, the tug was no longer in American Documentation. Her current and or final disposition is unknown.

She was powered by a 6 cylinder Fairbanks Morse Diesel engine turning a 16(in) by 20(in) wheel for a rated 1,200 horsepower.
(William Lafferty)