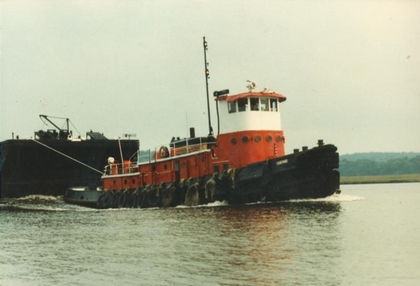 Built in 1938, by Defoe Shipyard of Bay City, Michigan (hull #162) as the William J. Moran for the Moran Towing Company of New York, New York.

In December of 1940, the tug was chartered to the United States Navy. Where the tug was classified as a yard net tender. And designated as the YN-45 (Wapasha). She was converted for naval use at the New York Navy Yard in Brooklyn, New York. And, was placed in service on of January 27th, 1941.

The tug was allocated to the 1st Naval District at Boston, Massachusetts, which became her home port. After shifting to Boston on the of February 1st, 1941 she took up her net tending duties in Narragansett Bay, based at Naval Training Center Newport at Newport, Rhode Island.

In 1947, the tug was acquired by the Moran Towing Company of New York, New York. Where she was renamed as the Anne Moran.

In 1976, she was acquired by the Eklof Marine Corporation of Staten Island, New York. Where she was renamed as the Yankee.

In 1993, the tug was scrapped. The tug was powered by a single diesel engine, turning a single, fixed pitch propeller. For a rated at 1,350 horsepower.
(NavSource Online)