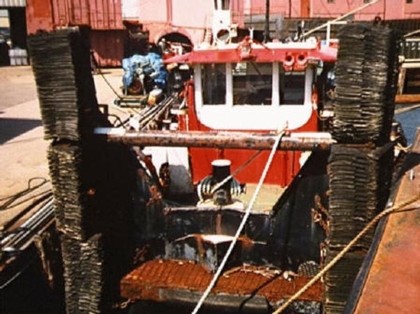 Built in 1958, by Sturgeon Bay Shipbuilding and Dry Dock Company of Sturgeon Bay, Wisconsin (hull #243) as the Shuttler .

The tug was then acquired by the Chicago Towing Company where she was renamed as the Harbor King .

In 1961, she was acquired by the Twin City Barge and Towing Company of St. Paul, Minnesota where she was renamed as the Red Wing . Although she was built for and primarily operated in the Chicago area, Twin City
Barge did bring the tug to St. Paul for one year.

She was later acquired by the Eklof Marine Corporation of Staten Island, New York where she retained her name, but it was merged into one word instead of two. While under the ownership of Eklof Marine she was transiting the Champlain Canal when she struck the Northumberland bridge and her wheelhouse was damaged beyond repair.

The tug was then fitted with the wheelhouse from the tug Emily Jean (also owned by Eklof, but was later renamed as the Rising Sun ).

The tug sank somewhere off of the Florida Coast.

She was a single screw tug with a flanking rudder rated at 1,200 horsepower.
(Dan Owen, Bob Mattsson)