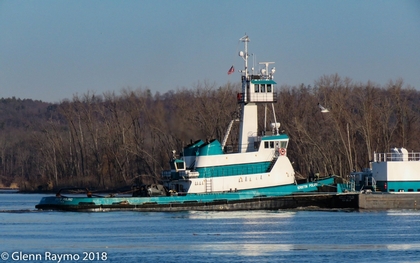 Built in 2006, by Thoma-Sea Boat Builders Incorporated of Houma, Louisiana (hull #126) as the Chesapeake for the Vane Brothers Company of Baltimore, Maryland.

However, construction was initially begun for Odyssea Vessels Incorporated of Berwick, Louisiana. When the deal unraveled. The Vane Brothers Company of Baltimore, Maryland acquired the unfinished tug from Thoma-Sea Boat Builders.

She was originally named for the Chesapeake Bay which is an estuary lying inland from the Atlantic Ocean surrounded by the states of Maryland and Virginia. It is the largest such body in the United States. More than one hundred and fifty rivers and streams flow into the bay's 64,299 square miles drainage basin. Which covers parts of six states (New York, Pennsylvania, Delaware, Maryland, Virginia, and West Virginia) and the District of Columbia.

At approximately 200 miles long from its northern headwaters in the Susquehanna River to its outlet in the Atlantic Ocean. It is 2.8 miles wide at its narrowest (between Kent County's Plum Point near Newtown and the Harford County shore near Romney Creek) and 30 miles at its widest (just south of the mouth of the Potomac River). Total shoreline including tributaries is 11,684 miles. Representing a surface area of 4,479 square miles. And, an average depth is 46 feet, reaching a maximum of 208 feet.

In 2017, the tug was acquired by the Poling-Cutler Marine Transportation Company of Freehold, New Jersey. Where she was renamed as the Kristin Poling. 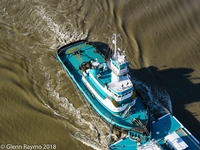