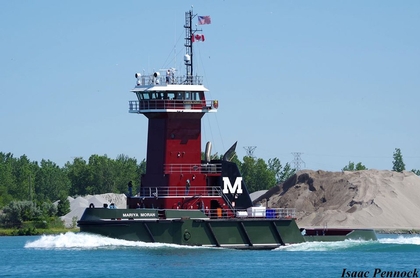 Built in 2015, by Patti Shipyards Incorporated of Pensacola, Florida (hull #175) as the Mariya Moran for the Moran Towing Corporation of New Canaan, Connecticut.

The tug is fitted with an INTERcon C series coupler system. And, is ABS A1 Towing Service, and AMS, with an international load line. And complies with applicable SOLAS regulations and is built from ABS Grade A Steel.

She is "married" to the 425(ft) 150,000 bbl barge Texas. Which was constructed in 2015. By the Manitowoc Marine Group of Sturgeon Bay, Wisconsin for the Moran Towing Corporation.
(Ocean Tug and Barge Engineering)