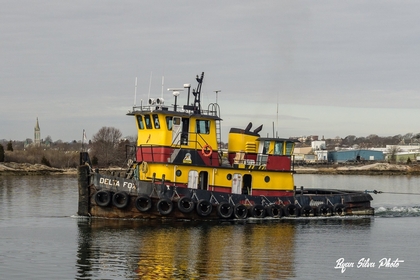 Built in 1980, by Berry Brothers General Contractors of Berwick, Louisiana (hull #6) as the Apache.

In 2004, the tug was acquired by Delta Towing Company of Houma, Louisiana. Where she was renamed as the Delta Fox.

In 2011, the Delta Towing Company was acquired by the Crosby Marine Transportation Company of Golden Meadow, Louisiana. Where the tug retained her name.

In 2014, the tug was acquired by Cardinal Marine Incorporated of Red Bank, New Jersey. Where she retained her name.

In 2018, she was phased out of active service and was "laid up" at Staten Island, New York.

Her electrical power is provided by two, 30kW generator sets. Driven by two, GM 3-71 diesel engine. The tug's capacities are 9,500 gallons of fuel, 6,000 gallons of potable water, and 100 gallons of lube oil.