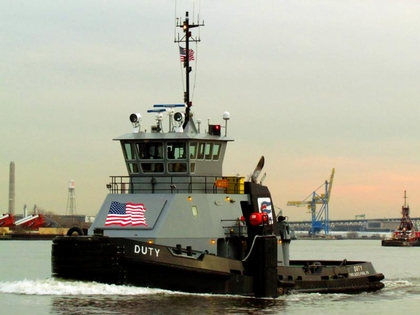 In 2019, the tug was acquired by South Puerto Rico Towing and Boat Services Incorporated of Guayanilla, Puerto Rico. Where she was renamed as the Nydia P.

The tug is outfitted with an expanded air filtration capacity both, for use by air breathing engines, and for the interior. Much of the extra filtration equipment is located in the stack assembly of the tug. Air being drawn into the vessel whether it be for ventilation, or for internal combustion. Is drawn into a filter bank. Any air drawn down to the engines, or engine room is filtered twice.

Her towing gear consists of a JonRie InterTech 500, single drum, hydraulic towing winch. Outfitted with 2,400(ft) of 1.75(in) towing wire. As well as a, JonRie InterTech 421 hydraulic capstans The capstans are mounted next to the tow winch and on the tug's bow. Power for the winch is produced by one of the tug's three generators.

The tug is outfitted two hydraulic towing pins, and a hold down clamp as well as a transom roller on her stern. And, a 10 ton North Pacific MCT-1030 hydraulic crane. With a telescoping boom and, a 30(ft) reach. Mounted on the second deck, aft of the wheelhouse.

She is fitted with custom designed port, and starboard deck winches. For wire push gear, in lieu of using the towing winch for the push gear.

Fixed pads were mounted on each side of the tug to maintain stability while pushing in a barge's notch. A number of Express Marine Incorporated's vessels featured this type of pad arrangement. Which was originally designed by the company for use on its 1150 class barges for service to the Hudson Generating Station in Jersey City, New Jersey. The tugs typically forced their way into and out of the notch with the application of grease on the pads.
(Wayne Huebschman, Brandon Durar, Captain Ted Bishop)