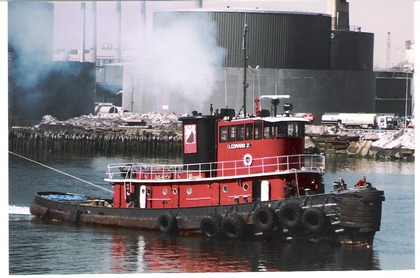 Built in 1953, by RTC Shipbuilding of Camden, New Jersey (hull #217) as the Howard E. Simpson for the Baltimore and Ohio Railroad Company of Baltimore, Maryland.

In 1975, the tug was transferred Hampton Roads Shipdocking (also known as the Chessie Shipdocking Company) of Norfolk, Virginia. Where she retained her name.

In 1985, she was acquired by Captain Arthur Fournier of the Penobscot Bay Towing Company of Belfast, Maine. Where she was renamed as the Douglas F.

In 1988, the tug was acquired by Russell Trip of the Bay State Towing Company of Boston, Massachusetts. Where she was renamed as the Leonard J.

In 1999, the engine room was gutted by a fire, that was determined to be the result of a crank case explosion.

In 2006, the hull was scrapped at the Thames Shipyard and Repair Company in New London, Connecticut. Originally powered by a single, Fairbanks Morse 38D-8 1/8 diesel engine. In 1999, the tug with another Fairbanks Morse diesel. She was a single screw tug rated at 1,800 horsepower.
(Paul Strubeck, Captain Brian Fournier, John "Red" Bartlett)


Back to BALTIMORE AND OHIO RAILROAD COMPANY