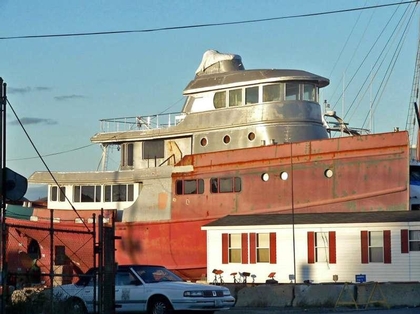 Pictured as: the Sea Monster Photo by: Matt Ruscher

Built in 1953, by Gulfport Shipbuilding Incorporated of Port Arthur, Texas (hull #427) as the Mars for the Boston Towboat Company of Boston, Massachusetts.

In 2000, she was acquired by the internet job search site Monster.com. Where the vessel was renamed as the Sea Monster. With the intention of converting her for use as a yacht, research vessel, and promotional tool.

The tug was completely dismantled down to the frames. All original machinery, piping, wiring and equipment removed. New systems were engineered, and installed to meet the new requirements of the design.

The Setzer Design Group redesigned the interior, and styled the exterior maintaining the classic lines of the period. The hull has a model shape with flush deck and elliptical stern. The original superstructure was removed, and an all new aluminum structure fabricated and installed with additional head room. That included stairway access to all decks, with large windows and doors. Westoff and Company, a large yacht interior engineer and fabricator. Completed a new interior featuring European Beech joiner work. The new interior, was valued at over one million dollars.

All new machinery, systems, piping, and electrical wiring was installed. The diesel-electric propulsion consisted of three, new Caterpillar generator sets in sound shielded enclosures. Feeding the original, rebuilt, electric drive motor, and single propeller. Over eight million dollars was invested in the project. The estimated cost to finish the vessel was approximately $1.5 million. Monster.com acquired her before the "dotcom" bubble burst. The company soon ran low on sufficient finds to complete the project. Plans were to eventually finish the vessel.

In 2015, the vessel was acquired by an undisclosed interest. And, she was moved to Derektor Shipyard in Mamaroneck, New York. Where the intention was to complete the conversion work to the vessel.

In 2018, she was relocated to Staten Island, New York. Where she was "laid up" at Mariner's Harbor.
(Matt Ruscher, Roger Francis II)