In 1985, she was acquired by Tidewater Marine Services Incorporated of New Orleans, Louisiana. Where she was renamed as the El Falcon Grande.

In 2006, the tug was acquired by the Crosby Marine Transportation Company of Golden Meadow, Louisiana. Where she was renamed as the Crosby Moon.

The tug's towing gear consists of a double drum, INTERcon, SBS towing winch. Outfitted with 5,900(ft) of 2.3(in) towing wire on each drum. 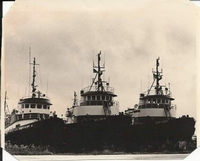