Built in 1970, by Main Iron Works of Houma, Louisiana (hull #242) as the Seminole Sun for the Sun Oil Transportation Company Incorporated of Marcus Hook, Pennsylvania. 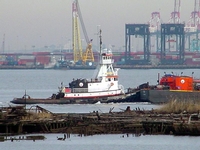 
Back to LEEVAC MARINE INCORPORATED