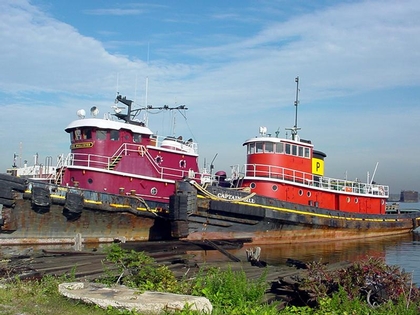 Pictured as: (at right) the Captain Bill (Fournier Towing) Photo by: Unknown

Built in 1950, by Jakobson Shipyard of Oyster Bay, New York (hull #328) as the Hazleton for the Lehigh Valley Railroad company of of Bethlehem, Pennsylvania.

In 1963, she was acquired by the Moran Towing Company of New York, New York. Where she was renamed as the Marie Moran.

In 1984, she was acquired by R.J. Casho Marine Towing Company of Wilmington, Delaware. Where she was renamed as the Marie Casho.

In 1986, the tug was acquired by Arthur Fournier of Portland, Maine. Where she was renamed as the Captain Bill.

The tug was later acquired by an individual named Veronica Segars. Who renamed the tug as the Veronica M.

However, on November 10, 2004, the tug was reefed off of Bayhead, New Jersey as part of an artificial reef program.

She was a single screw tug powered by a single Cleveland 16-278A diesel main engine for a rated 1,600 horsepower.
(Paul Strubeck) 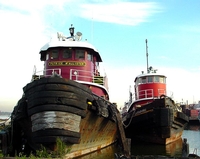 Pictured as: (at right) the Captain Bill (Fournier Towing) Photo by: Unknown

Pictured as: the Marie Moran (Moran Towing) Photo by: Unknown