Built in 1975, by Matton Shipyard of Cohes, New York (hull #341) as the Texaco Tampa for the Texaco Marine Company of Beaumont, Texas.

In 1993, the Texaco Marine Company renamed the tug as the Star Tampa.

In 1993, the tug was acquired by the Morania Oil Tanker Corporation of Staten Island, New York. Where she renamed as the Dolphin.

In 1994, she was acquired by the Turecamo Harbor and Coastal Towing Corporation of New York, New York. Where she was renamed as the Jean Turecamo.

In 2012, the Moran Towing Corporation removed her upper wheelhouse.

Her electrical service is provided by two, 100kW generator sets. The tug's capacities are 57,853 gallons of fuel. 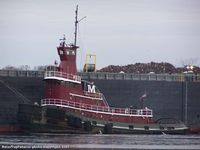