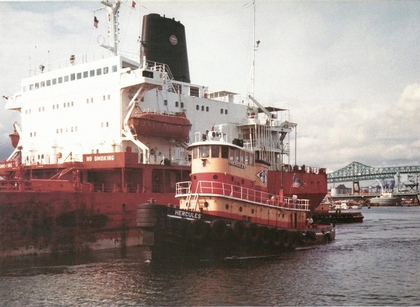 Built in 1953, by RTC Shipbuilding Incorporated of Camden, New Jersey (hull #216) as the Roy B. White for the Baltimore and Ohio Railroad Company of Baltimore, Maryland.

In 1979, the tug was acquired by the New York Dock Railway Company of New York, New York. Where she retained her name.

In 2001, the tug was phased out of active service. And she was "laid up" at Boston Towing and Transportation's yard in East Boston, Massachusetts.

In 2003, she was acquired by Plaza Enterprises Limited of Lagos, Nigeria. Where the tug retained her name.

She was powered by a single, Fairbanks-Morse 38D-8 1/8 diesel engine. The tug was single screw, rated at 1,600 horsepower.
(Paul Strubeck, Jordan Spreader)


Back to BALTIMORE AND OHIO RAILROAD COMPANY