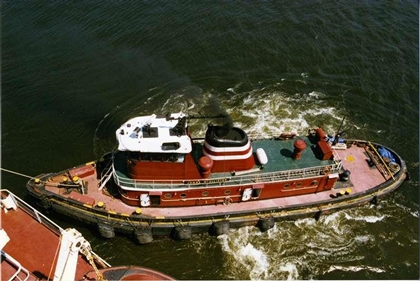 Pictured as: the James McAllister (McAllister Towing) Photo by: ShipJohn

Built in 1957, by the Bethlehem Steel Company of Staten Island, New York (hull #8516) as the Syracuse for the Syracuse Delaware Lackawana and Western Railroad Company of New York, New York.

In 1974, she was acquired by the Baker Whiteley Towing Company of Baltimore, Maryland. Where she was renamed as the Scandinavia.

In 2010, the tug was retired from service. And, was eventually scrapped.

In 1981, she was repowered with a single GE 7FDL diesel engine. She was a single screw tug, rated at 3,000 horsepower.
(Paul Strubeck, Dave Boone, Captain Brian Fournier)


Back to BAKER WHITELEY TOWING COMPANY