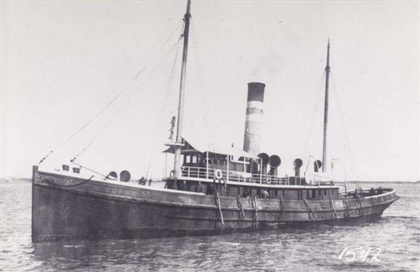 In 1898, she was acquired by the Atlantic Transportation Company of Boston, Massachusetts. Where the tug retained her name.

In 1912, the tug was acquired by Captain A.J. McAllister of the Greenpoint Lighterage Company of New York, New York. Where she retained her name.

In 1916, the tug was acquired by a foreign company called the Sugar Products Shipping Company. However, the tug was lost with all hands in a hurricane, after taking on bunkers in Trinidad, West Indies.

She had been completely overhauled just before her voyage. Under ordinary circumstances her bunkers would have carried sufficient coal for twelve days steaming. The tug was provisioned for four months. She regularly carried a crew of seventeen. However on this particular voyage, she carried twenty three crew members. The tug left New York for West Africa via San Juan on the July 17th, 1916.

The center of a tropical disturbance was reported by the Weather Bureau north of Santo Domingo. It is believed, the tug likely ran into the hurricane which had crossed the Atlantic and struck Spain on July 25th, 1916. The tug would have reached San Juan, Puerto Rico approximately twelve days after her departure. However, she never arrived and there is no record of the tug ever being found.

Driven by a single engine. She was a single screw tug, rated at 1,050 horsepower.
(David Wright, Steve Lang)


Back to CORNELL STEAMBOAT COMPANY