Built in 1976, by Main Iron Works Incorporated of Houma, Louisiana (hull #311) as the Ambassador for the Interstate Oil Transportation Company of Philadelphia, Pennsylvania.

In 1998, the tug was acquired by the K-Sea Transportation Partnership Incorporated of East Brunswick, New Jersey. Where she was renamed as the Tasman Sea. 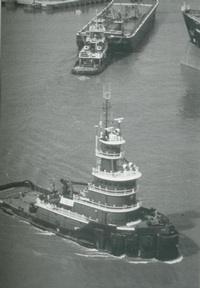