Built in 1985, by Eastern Marine Incorporated of Panama City, Florida (hull #91) as the Winslow C. Kelsey for the General Dynamics Corporation of Needham, Massachusetts.

Originally built to perform submarine assist, and coastal towing duties for the General Dynamics Corporation based from the company's Electric Boat facility in Groton, Connecticut.

The tug is named for Winslow "Skip" Kelsey. Who was an employee of the General Dynamics Electric Boat Division in Groton, Connecticut. Who in 1955, was honorably discharged from the United States Coast Guard Lighthouse Service.

Upon retiring he sailed as Master aboard the Electric Boat Corporation tugs Hackensack, and Three Deuces. He also sailed as master on the tug that was bore is namesake. Captain Winslow Kelsey passed away in 2009.

In 1990, the tug was chartered by American Tugs Incorporated of San Juan, Puerto Rico. Where the tug retained her name. And, she served as an assist tug at the LNG Terminal in Guayanilla, Pueto Rico.

In 1997, she was chartered to the St. Philip Coastal Towing Company of Tampa, Florida. Where she retained her name.

The company would later be owned by George Steinbrenner. Who also owned the New York Yankees. Under that ownership, the company became the Bay Transportation Company of Tampa Florida.

In 1998, the Bay Transportation Company was acquired by Hvide Marine Incorporated of Fort Lauderdale, Florida. Where the tug retained her name.

In 2008, she was acquired by Captain Arthur Fournier of the Fournier Towing and Ship Service Incorporated of Belfast, Maine. Where she retained her name.

In 2012, the tug was acquired by the McAllister Towing and Transportation Company of New York, New York. Where the she was renamed as the Alex McAllister.

The towing gear consists of a Skagit 55, single drum, towing winch. Outfitted with 2,400(ft) of 2.25(in) stainless steel wire with a line pull of 175,000 pounds. On her bow she is fitted with a JonRie Series 230 winch, and a Skagit capstan on her stern.
(Chris Scarborough, Brandon Durar, Captain Patrick Fournier, Captain Calvin Edmonds, Captain Brian Fournier) 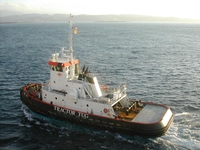 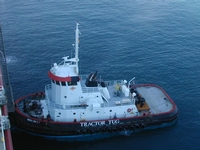 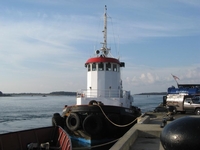 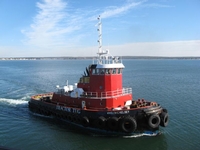 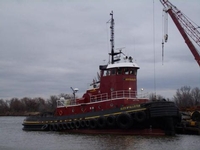