Built in 1981, by Halter Marine Incorporated of Lockport, Louisiana (hull #982) as the Nick Candies for the Otto Candies Company of Des Allemands, Louisiana.

In 2014, the tug was acquired by the Vogel Equipment Company of San Francisco, California. Where the tug retained her name. However, she was to be operated under the Panamanian Flag, under the management of the Remolcadores De Altura Company of Panama City, Panama.

In 2015, the tug sank two and half miles west of Barbers Point Harbor, Oahu.

Her towing equipment consisted of a Markey TDSD-32, double drum, towing winch. Outfitted with 2,000(ft) of 2(in) towing wire. 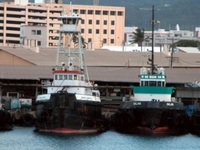