Built in 1974, by Service Machine and Ship of Amelia, Louisiana (hull #112) as the Miss Billee for the Fonteneau and Smith Boat Company of Morgan City, Louisiana.

In 1978, the Fonteneau and Smith Boat Company was acquired by Newpark Marine Services of The Woodlands, Texas. Where the tug retained her name.

In 1983, she was acquired by the Gulf Fleet Marine Corporation, of Houston, Texas. Where the tug was renamed as the Gulf Sword.

In 1992, the tug was acquired by the DonJon Marine Company Incorporated of Hillside, New Jersey. Where she was renamed as the Mary Alice. 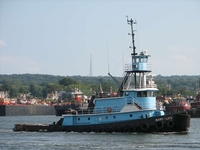