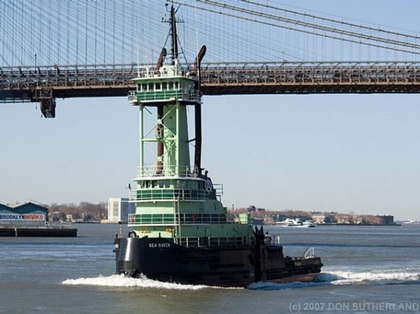 Built in 1980, by Todd Shipyards Incorporated of Galveston, Texas (hull #55) as Gemini for the Dow Chemical Corporation of Midland, Missouri.

The tug was "assembled"in the early 1980's. The assembly began with hulls #575 and #578 that where constructed in 1941 by Weaver Shipyards of Orange, Texas.

The hulls where originally built as Navy V-4 type tugs. That where single screw, and fitted with kort nozzles. When the tugs where scrapped, their sterns where salvaged, and towed from a scrap yard in Brownsville, Texas to Todd Shipyard in Galveston, Texas. The two sterns where cut and welded together. The new stern was married to a fore body that had been constructed by Todd Shipyard and was fitted with a Bludworth coupler system.

In 1982, with the construction tasked to Richard and Robert Bludworth was completed. And, the Dow Chemical Corporation contracted the manning, and operation of the unit to the Bludworth's Old River Towing Company of Houston, Texas. Where the tug was renamed the tug as the Sea Skimmer.

She was one of two Articulated Tug and Barges (ATBs) that where built, and operated However, in the years that followed. The Sea Skimmer was plagued with a multitude of mechanical problems. In one instance, the tug was ejected from the notch of her barge off of Sandy Hook, New Jersey.

In 1990, the tug was acquired by the Texaco Marine Company Incorporated of Beaumont, Texas. Where she was renamed as the Star Providence.

In 1993, she was acquired by Dixie Offshore Transportation Incorporated of Houston, Texas. Where she was renamed Dixie Commander.

In 2000, the tug was acquired by the Allied Transportation Company of Norfolk, Virginia. Where she was renamed as the Sea Raven.

In 2018, the tug and her barge were towed to Louisiana, and were scrapped. 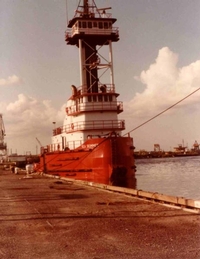 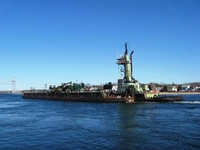 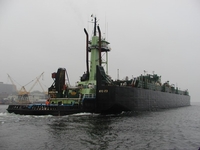