Built in 1999, by C and G Boatworks, Incorporated of Mobile, Alabama (hull #35) as the James Palladino for the Inland Bulk Transfer Company of Sandusky, Ohio.

In 2005, the tug was acquired by the Laken Shipping Corporation of Cleveland, Ohio. Where she was renamed as the Cleveland.

In 2012, the tug was acquired by McAllister Towing and Transportation of New York, New York. Where she was renamed as the Patrice McAllister.

However, while on delivery from Toledo, Ohio to New York, New York. The tug suffered a fire in her engine room. The tug was salvaged and towed to Clayton, New York. She was later towed to McAllister Towing and Transportation's yard in Staten Island, New York.

The tug was eventually moved to Chesapeake Shipbuilding in Salisbury, Maryland. Where she was completely refurbished. And in 2013, she reentered service. 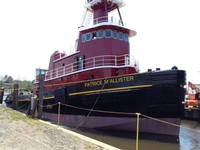