Built in 2012, by the Chesapeake Shipbuilding Corporation of Salisbury, Maryland (hull #105) as the Red Hook for the Vane Brothers Company of Baltimore, Maryland.

Designed by Frank Basile of Entech and Associates of Houma, Louisiana. She was the seventh Sassafras class tug constructed for the Vane Brothers Company.

Named for Red Hook, which is a neighborhood in the New York City borough of Brooklyn. Where Vane Brothers maintains a port of operation. Red Hook is named for the red clay soil and the point of land projecting into the Upper New York Bay.

The village was settled by Dutch colonists of New Amsterdam in 1636, and named Roode Hoek. In Dutch "Hoek" means "point" or "corner." The actual "hoek" of Red Hook was a point on an island that stuck out into Upper New York Bay at today's Dikeman Street west of Ferris Street. 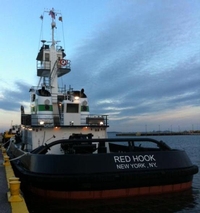 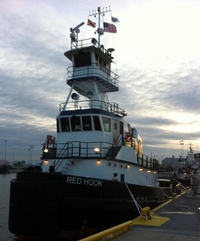