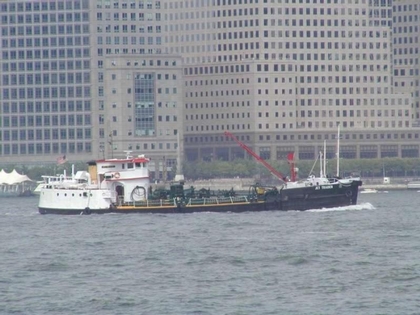 In 1945, the tanker was allocated to 15th Naval District at San Juan, Puerto Rico.

In 1965, she was acquired by the Eklof Marine Corporation of Staten Island, New York. Where the tanker was renamed as the Jet Trader.

In 1993, the Eklof Marine Corporation was acquired by K-Sea Transportation Partnership Incorporated of Staten Island, New York. Where the unit retained her name.

In 2004, she was "laid up" at the K-Sea Transportation Partnership's yard in Mariner's Harbor in Staten Island, New York. As a result of OPA '90 regulations that prohibited the transport of petroleum products by single skin vessels.

On September 2nd, 2005 the tanker was reefed off of Atlantic City, New Jersey. She was powered by a single, Detroit Diesel 12-149 diesel engine. With a Twin Disc reduction gear, turning a single, fixed pitch propeller. She was a single screw tanker, rated at 1,800 horsepower.