In 1989, the tug was acquired by the Eklof Marine Corporation of Staten Island, New York. Where she was renamed as the Houma.

In 1993, the Eklof Marine Corporation was acquired by the K-Sea Transportation Partnership Incorporated of Staten Island, New York. Where the tug retained her name.

In 2006, she was outfitted with a JAK coupler system at Fenney's Shipyard in Kingston, New York.

In 2013, the Kirby Corporation's Philadelphia, Pennsylvania operation. Also known as River Associates Incorporated. Was acquired by the Vane Brothers Company of Baltimore, Maryland. Where the tug retained her name.

In 2016, the tug was phased out active service. And, was "laid up" in Baltimore, Maryland.

In 2017, she was scrapped at Sparrow's Point in Baltimore, Maryland. 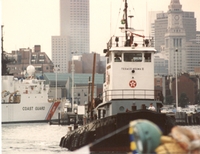