Built in 1999, by Thoma-Sea Boatbuilders Incorporated of Houma, Louisiana (hull #110) as the Dumar II for the Dolphin Marine Company of Golden Meadow, Louisiana.

In, 2010, the the Dolphin Marine International Company was acquired by Harvey Gulf International Marine Incorporated of New Orleans, Louisiana. Where she was renamed as the Harvey Spartan.

In 2010, the tug was acquired by the Crosby Marine Transportation Company of Golden Meadow, Louisiana. Where she was renamed as the Crosby Liberty.

In 2016, she was acquired by the Kirby Corporation of Channelview, Texas. Where the tug was fitted with an upper wheelhouse. And, was renamed as the Brooke Chapman.

In 2022, the tug was acquired by the Sause Brothers Ocean Towing Company of Coos Bay, Oregon.

The tug's towing gear consists of a McElroy DT-84, double drum, towing winch. Outfitted with 3,000(ft) of 2(in) towing wire. As well as a, McElroy hydraulic towing pin system. And, a 750(lb) Danforth anchor. 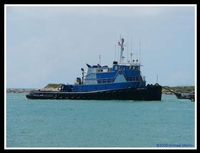