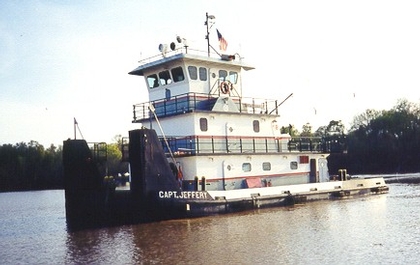 Built in 1997, by Hope Services Incorporated of Dulac, Louisiana (hull #129A) as the Capt. Jeffery for the Crosby Marine Transportation of Company Golden Meadow, Louisiana.

In 2013, the tug was acquired by Higman Barge Lines of Houston, Texas. Where the tug was renamed as the Empire.

In 2015, she was acquired by Magnolia Fleet Incorporated of Luling, Louisiana. Where the tug was renamed as the Adeline.

Powered by two, Caterpillar 3412 diesel engines, with a 6.96:1 reduction. Turning two, stainless steel propellers. She is a twin screw towboat, rated at 1,800 horsepower.

Her electrical service is provided by two, 40kW generator sets driven by two GM 4-71 diesel engines. The tug's capacities are 20,000 gallons of fuel oil, and 6,000 gallons of potable water.