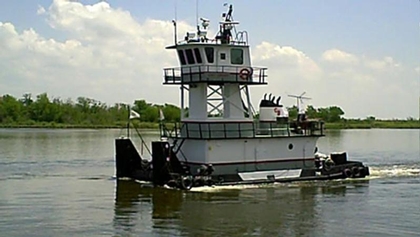 Built in 1981, by the Ortis Brothers Boat Company of Krotz Springs, Louisiana (hull #131) as the Silver Hawk for the Hawk Towing Company of Larose, Louisiana.

In 1986, the tug was acquired by the Crosby Marine Transportation Company of Golden Meadow, Louisiana. Where she was renamed as the Kurt Crosby.

In 2014, the tug was removed from service. Her current, and or final disposition is unknown.

She was powered by two, GM 8V-92 diesel engines. With Twin Disc reduction gears, at a ratio of 6:1. Turning two, cast steel, fixed pitch propellers. She was a twin screw towboat, rated at 900 horsepower.

Her electrical service was provided by two, 20kW generators. The tug's capacities were 6,000 gallons of fuel oil, and 2,500 gallons of potable water.