In 2014, Harvey Gulf's Marine's tug division was acquired by the Signet Maritime Corporation of Houston, Texas. Where the tug was renamed as the Signet Intruder.

Powered by two, EMD 16-645 E7 B turbo charged diesel engines. With Lufkin RS3040 reduction gears, at a ratio of 5:1. Turning two, Bird Johnson, 113(in) by 113(in), stainless steel propellers, mounted in kort nozzles. She is a twin screw tug, rated at 13,500 horsepower. The tug is also outfitted with a 500 horsepower, Marprop bow thruster. 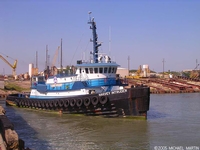 
Back to HARVEY GULF INTERNATIONAL MARINE