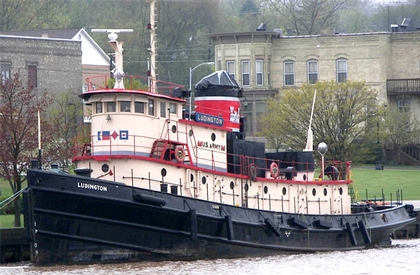 Built in 1943, by Jakobson Shipyard of Oyster Bay, New York (hull #297) as the Maj Wilbur F. Browder for the United States Army.

The tug participated in the D-Day invasion of Normandy, towing ammunition barges across the English Channel. It eventually ended up in Cherbourg, France where it assisted harbor operations until being sent to Plymouth, England for the duration of the war.

In 1947 the tug was transferred to Kewaunee, Wisconsin by the Corps of Engineers and was renamed the "Tug Ludington". Since its arrival in Kewaunee, Tug Ludington assisted in the construction and maintenance of many harbors on the Great Lakes.

In 1998,the tug was donated to the city of Kewaunee, Wisconsin where she was placed for public display.