In 2006, the tug was chartered to the Signet Maritime Corporation of Pascagoula, Mississippi. Where she was renamed as the Signet Magic. 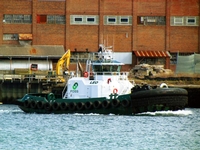