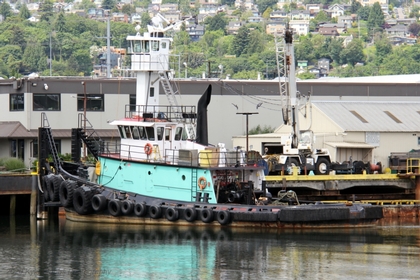 Pictured as: the Island Breeze (Island Tug and Barge) Photo by: Kyle Stubbs

Built in 1970, by Albina Machine and Engine Works of Portland, Oregon (hull #418) as the Shelley Foss for Foss Maritime of Seattle, Washington.

In 2010, the tug was acquired by the Manson Construction Company of Seattle, Washington. Where she was renamed as the Nancy M.

Shortly after acquisition, she was modified with the addition of bow push knees, to facilitate moving barges and derricks operated by Manson Construction.

In 2020, she was acquired by the Island Tug and Barge Company of Seattle, Washington. Where the tug was renamed as the Island Breeze.

Shortly after acquisition, the tug was modified with the addition of an upper wheelhouse, to facilitate use in pushing loaded gravel barges.

Her electrical service is provided by one, 115kW and one, 50kW generator sets. 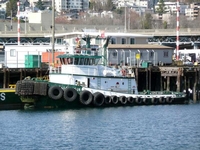 Pictured as: the Island Breeze (Island Tug and Barge) Photo by: Kyle Stubbs