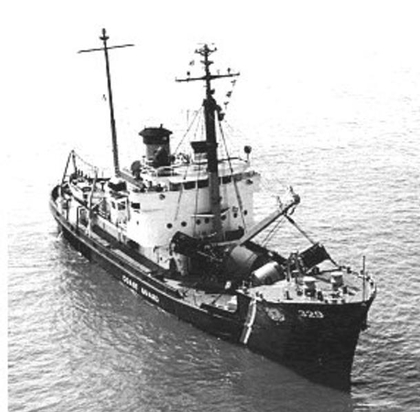 Built in 1942, by Marietta Manufacturing Company of Point Pleasant, West Virginia (hull #476) as the Col. George Armistead for the United States Army.

The vessel was designed as a mine planter for the United States Army Coast Artillery Corps.

In 1944, she was transferred to the United States Navy where she was designated as the ACM-5 (Barbican). And, was converted to an auxiliary minelayer for service at the Charleston Navy Yard in Charleston, South Carolina. She was commissioned on March 24th, 1945.

In 1945, the vessel was transferred to the Pacific Fleet. The vessel arrived in the Pacific too late to participate actively in combat against the Japanese. On August, 17th, 1945, she departed Pearl Harbor to arrive at Saipan on September 20th, 1945 after a brief stop at Midway. For one month she operated between the Marianas and Ryukyu Islands as a tender, and operational headquarters for a YMS squadron.

On October 24th, 1945 she departed Okinawa for Sasebo, Japan. Where she remained on occupation duty in the Far East until February 24th, 1946. When she departed for the United States, where she was decommissioned on June 12th, 1946.

In 1946, the vessel loaned to the Coast Guard the same day where she was redesignated as the USCG Ivy (WAGL 329).

In 1965, the United States Coast Guard redesignated her as the WAGL 329.

In 1969, she was decommissioned by the United States Coast Guard. Where she was made available for sale for commercial use.

In 1969, she was acquired by the Foss Launch and Tug Company of Tacoma, Washington. Where she was renamed as the Agnes Foss.

In 1970, the Foss Launch and Tug Company removed the tug from active service. Where she was "laid up" at Tacoma, Washington.

In 1977, the tug was acquried by Industria De Pesca of Guayaquil, Ecuador. Where she converted for use as a tuna seiner. And, renamed as Maria Jose.

In 2001, the vessel went out of documentation. Her current, and, or final disposition is unknown. She was powered by a single, Skinner, reciprocating, steam engine. With two, combustion engineering boilers. Turning two, fixed pitch propellers, for a rated 1,200 horsepower.
(Kyle Stubbs, NavSource Online)