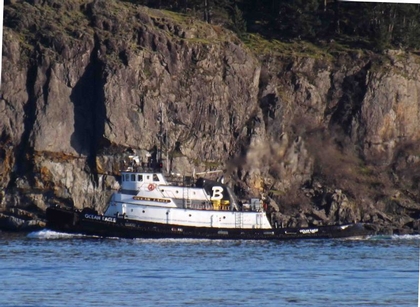 Pictured as: the Ocean Eagle (Brusco Tug and Barge) Photo by: Dirk Septer

Built in 1970, by Halter Marine Services Incorporated of New Orleans, Louisiana (hull #256) as the AWA for the Hawaiian Tug and Barge Company of Honolulu, Hawaii.

In 1980, the tug was acquired by the Knappton Towboat Company of Astoria, Oregon. Where she was renamed as the Alapul.

In 2012, she was acquired by the Dahl Tug and Barge Company of Seattle, Washington. Where the tug was renamed as the Ocean Eagle.

In 2013, the tug was acquired by the Brusco Tug and Barge Company of Longview, Washington. Where she retained her name.

The towing gear consists of a Red Fox, double drum, towing winch. With level winds, and outfitted with 1,600(ft) of 2(in) towing wire on one drum and 2,000(ft) of 1 .75(in) wire on the second drum. She also features a hydraulic bow winch, outfitted with 1 1/8(in) wire with two 15(in) diameter gypsy heads. The tug is also fitted with a hand operated swing crane on deck.
(Captain Russell Shrewsbury, Captain Ron Greger, Captain Ric Shrewsbury, Kyle Stubbs) 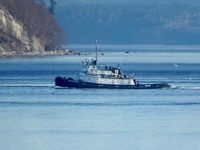